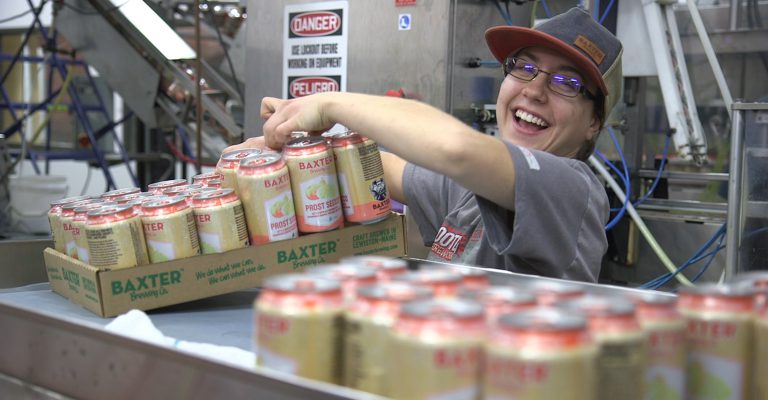 When we hired Andrew Sheffield in 2017 as our Director of Brewing, we knew we’d want to put his prior experience in both winemaking and sour beer production to good use as quickly as possible. So when he came to us at a weekly meeting a few months ago with the idea for Prost Secco and suggested slotting it into our Revolver Program at the next available spot, we couldn’t help but jump at the idea! Since it’s truly his baby, we asked Mr. Sheffield to elaborate a bit more on the concept of the beer—a Kettle Sour ale brewed with real Chardonnay Grapes, and peach and pear juice—and why he was so eager to bring the idea to fruition at Baxter. Here’s what he had to say:

Every craft beer tells a story. From the history of the beer style, to the ingredients that go into it, and the technique and passion with which it’s made. The Brewers of this community are constantly adding chapters to the story of our industry. It’s been fascinating to see this unfold. If you work extremely hard and get incredibly lucky, you might get the opportunity to add something very personal to the collective narrative: This is what Prost Secco is for me.

This beer represents the ideas that I’ve collected over more than a decade of travels across the world and from the transition from winemaker to brewer. I have watched with great interest as brewers have incorporated elements from the wine world into their brewing processes; from barrels to yeast and grapes. My goal was to do something more integrated, that potentially blurred the line between beer and wine. Cool climate sparkling wines are defined by light and lean flavor profile with subtle aromatics and bright acidity. For this reason, we brought in Chardonnay grapes from Upstate New York to bring soft floral and vinous aromas and crisp green apple flavors. I added smaller amounts of peach and pear juice to contribute delicate orchard and stone fruit notes to the bouquet and complex, almost cider-like tastes. Beer is the backbone of the beverage, so we formulated that recipe to be heavy in Maine grown and malted red wheat to interact with the yeast and produce the toasty, bready and earthy profile that is significant for sparkling wines. The lactic acidity produced by the kettle souring process ties the whole thing together, vividly bright on the nose with a lazer clean finish.

The brewing team at Baxter is comprised of some of the most talented and dedicated folks I’ve ever had the pleasure of working with. Besides getting the chance to tell his personal story, Prost Secco represented the opportunity to bring a fresh challenge to the team. To make a clean, sour ale is technically difficult and something we’ve never attempted on a large scale. It took everyone’s input to figure out how to take my knowledge and experience in making sour beers and apply it to Baxter’s brewing system. This was a ‘one shot to get it right’ deal and I am so pleased with our execution in taking an idea and turning it into a delicious reality.

Prost Secco, which follows award-winning Window Seat and precedes Summer Swelter in our Revolver Series, will be on the street throughout our distribution footprint—in 12oz 6pks and on draught—in early February, just in time for Valentine’s Day.  This is unlike anything Baxter has ever produced commercially, we can’t wait for you to give it a try! Cheers!