More than just a pretty view… 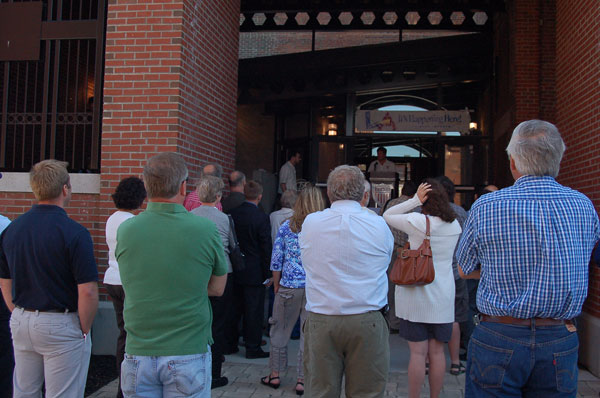 From the time of its construction in the 1850’s, The Bates Mill has been reliant on the hydro power of the nearby Androscoggin River. The massive water falls (Great Falls) and subsequent canal systems in Lewiston provided a constant supply of hydro power for the mills to tap in to. The more water you could harness, the more power you could supply, and the more machines you could run, the more product you could make. The uninterrupted supply hydro power was one of, if not the most, important piece of stimuli to the early development of the Lewiston/Auburn area!

The first canals in Lewiston were privately funded and developed by the namesake of the mills, Benjamin Bates. Recognizing the immense potential of the nearby Great Falls, Bates dug the canals to power his massive mills, at one point the leading employer in the State of Maine. Irish Immigrants in the area provided most of the labor force for building these canals.

The Lewiston canals are broken into five different sections; the upper canal which runs behind the Pub, a lower canal, and three different cross canals appropriately named cross canal one, two, and three, with #1 being the waterway that runs directly next to the Pub! These canals are the transport system for water that enters above Great Falls and flows through downtown Lewiston, exiting the canals below the falls. The falls themselves already generated a massive amount of water, so the canals were built to move it in such a way that it could be used to power the generators used to run the mills.

The canals functioned in a pretty straightforward manner. Water was let in from the gatehouse at the start of the upper canal. Water ran through the upper canal and was redirected one of two ways, down cross canal one, or cross canal two. Canal one had power stations at the start and end that housed the generators that powered the buildings that the Pub is in now (the Bates Mill). After flowing through one of the two cross canals, the water entered the lower canal where it was directed to the final cross canal, and finally sent back into the Androscoggin.

The Bates Mill and the Lewiston canal system were symbiotic to say the least. Without the vast amounts of hydro potential in the Androscoggin, it’s possible the The Mills would have never come to be…and without the prospect of a profitable mill, the canals would never have been built. The hard work and ambition of our ancestors created the L/A that we know today, but its important to remember that Mother Nature played an equally important role in shaping the identity of our community.