Blog / ALL ABOARD THE GRAIN TRAIN: MALT CONVEYANCE IMPROVEMENT PROJECT

ALL ABOARD THE GRAIN TRAIN: MALT CONVEYANCE IMPROVEMENT PROJECT 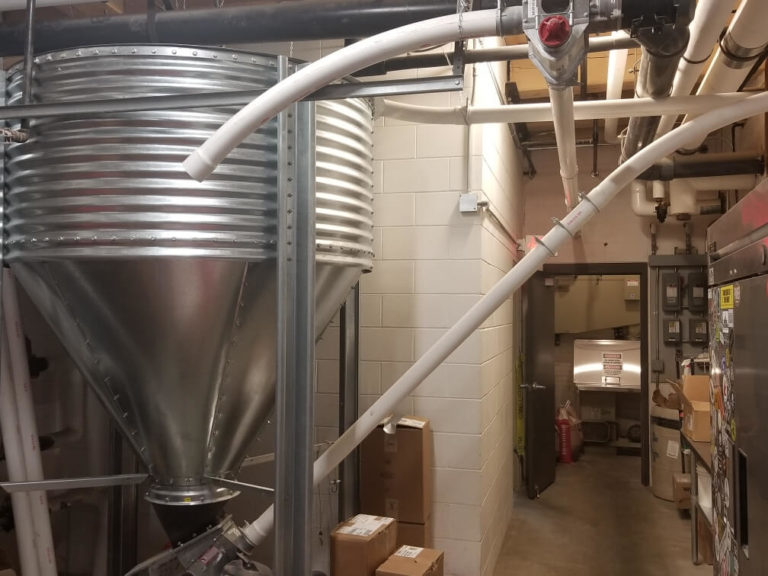 Have you ever heard the phrase ‘Ten pounds of fun in a five-pound bag’? That would be a good way to describe how we have been packing our system with malt for the last eight years. When Baxter bought our beautiful brewhouse from Ninkasi Brewing in Eugene, the intention was always to brew big, flavorful beers. The only downside to this worthy goal is that it doesn’t always all fit!

Our creative and hardworking brewers have always found a workaround. We’ve been packing the grist case (a vessel suspended above the mash tun that holds the milled grain for the brew) until its full. That usually holds about 70% of the malt that we want to brew with. The brewer will then begin the mash-in process (mixing the malt with hot water) which lower the level of the grist. Once they’ve gotten all the flow rates stabilized and the temperature dialled in, they’ll sprint over to the mill and start adding malt to get the rest of the grain into the grist case before the rest of the process is finished. It’s a sprint and a labor of love, putting metric tons of milled malt into our brewhouse, four times a day.

It was never anyone’s opinion that this was the most user-friendly way of doing things, but we were out of space to expand the holding vessel. After racking our brains and rearranging our space, we found room for a 2.5-ton grain silo inside our loading dock. This is not where the grain needs to end up, but we can use it as an expansion tank which can temporarily hold the grain that the grist case won’t. This involved adding long curving runs of flex augers to take the malt from the mill, through the brewery, back out a concrete wall to the loading dock and then back again.

The convoluted path it runs is now the one that our brewers don’t have to. Its goal is not just to save steps and stress, but just as importantly, to allow them to just focus on the delicate balance of grains, water and temperature that make for a great mash. It’s another investment Baxter has made in its process and its people, towards the goal of making the best beer you can find anywhere.