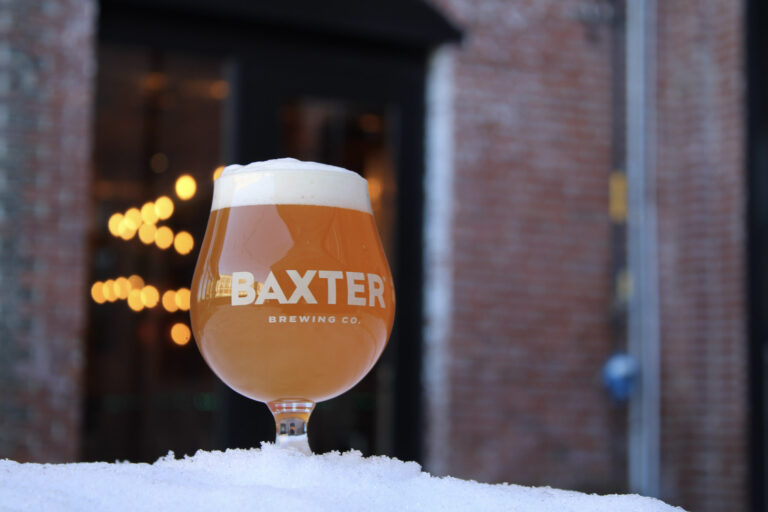 The year is 2011. Adele is cranking out now-classics like “Rolling in the Deep”; Oprah just ended her reign as the undisputed talk show queen, and I’m a naïve 19-year-old using phrases like “Totes mcgoats” or “Humble-brag”. Oh, and more importantly Baxter Brewing has just canned their first beer becoming the 16th brewery to open in the state of Maine. Baxter Brewing was the first brewery to exclusively can their beer –leading to our first company slogan “We do what we can, we can what we do.” Back then, I’d imagine Baxter sales representatives actually had to convince people that canned beer tastes the same –if not better –than bottled beer. Looking back, 12 years sure does feel like a lifetime ago. You see I’ve, recently turned 30, and I’m feeling the passing of time more acutely these days. Take for instance when I sell Ice Storm of ’98.

It’s 4pm, but since this is January in Maine it’s already dark. I’m in Windham and I’m going to be late for a sampling I have in Raymond in a half hour. I know I’m pushing it, but there is a bar manager I want to see on the main drag of Windham before I head west on route 302. I pull into the empty parking lot, grab a sample of Ice Storm, and head into the bar. A disinterested teenager looks up from her phone “A table for one?” she asks.

“Actually, I was hoping to grab a seat at the bar.” She shrugs and gestures toward an empty bar, which I saunter over to. The bartender dutifully comes over.

“Actually, I’m swinging by with Baxter Brewing, I was hoping I could chat with Emma if she’s in.” The bartender sticks her head in the swinging doors that lead to the kitchen.

“Emma, the rep from Baxter Brewing is here to see you,” she shouts. Moments later a young woman, presumably Emma, walks out from the kitchen. I’m pretty bad at guessing people’s age, but she looks hardly old enough to drink.

“Hey Emma, my name is Jonas –like the Weezer song.” It’s how I’ve introduced myself for years now. I know not everyone gets the reference, but being a 90s kid, I love alternative rock band Weezer. It brings forth memories of drinking mountain dew and playing guitar hero in my friend’s basement.

“Oh Jonas, like the Jonas Brothers?” she asks. It’s a fair reference; the Jonas brothers are much more relevant to the Gen Z Tik-Tok culture than Weezer ever was. Still, that doesn’t help to cushion the blow of me feeling out-of-touch and old.

“Yep, exactly like the Jonas Brothers,” I continued before launching into my pitch. “I’m not sure if you were in Maine in 1998, but that winter we got hit by a wicked blizzard. Trees were down, most folks lost power for weeks on end. We’re all still pretty fond of talking about that storm, so it’s a wink and nod to those of us who remember Baxter’s released our winter seasonal Ice Storm of ’98. The liquid is an approachable lower Abv New-England IPA that leans toward tropical fruit profile. Personally, I get a lot of pineapple on the nose, with a clean subtly sweet finish.”

“Oh yeah, my dad has talked about that storm. I wasn’t born until 2001, so I can’t say I was around for it.” I’m trying to do the mental math and realize that children born into a post 9/11 world are old enough to drink. Again, I feel the weight of my age. She is very polite, listens to me talk about the beer and Baxter as a whole. We chatted for a little while longer. I ask her what brands have done well for her historically, and what her decision-making process looks like when adding new brands. She assures me she’ll try the beer with her staff. I leave the account feeling old, but optimistic about a good first meeting.

I pull into The Good Life market in Raymond just in time for my sampling. Good Life Market, a cozy specialty foods store with a diverse beer selection, has everything set up for me. The beer is nestled in an icebox, sample cups are stacked neatly on the table next to an impressive display of Howl Together, Coastal Storm, and Ice Storm of ’98. It’s a small and intimate space, but it’s clear the customers are engaged around the brand –asking insightful questions and sharing their Baxter memories.

About half-way through the sampling, two of the customers begin striking up a conversation. From the snippets that I overhear it’s clear that they know each other. It’s a common enough occurrence for anyone who has spent time in rural Maine. I know when I head home to Rockland, I can’t throw a stone without running into someone I knew from high school sports or theater. I assume from their pleasant conversation that they’re friends or at least neighbors, until one of them leaves and the other one says to me, “You see that guy who just left. That is the most pleasant conversation I’ve had with him in over 10 years. You see, he and I are on opposite ends of the political spectrum. I always see these ridiculous signs in his yard, and we’ve had some heated discussions around it. Who would’ve thought we’d have found common ground in the beer we drink. Anyways, just thought you should know.” He says as he grabs a 4pk and heads to the register.

It’s hard to see the trees through the forest. It’s easy to get caught up in the day-to-day minutia of craft beer, that I forget one of the most important lessons I’ve learned at Baxter Brewing. Beer has the power to bring people together. Whether it’s by telling stories of communal experiences or sharing a 4-pack of the latest release from your favorite brewery (hopefully Baxter).

Baxter Brewing is coming up on our 12th anniversary as a brewery. Even more impressive, we sold more beer in 2022 than ever before –not something many breweries can say in their 12th year of business. Baxter Brewing has taught me a lot in the two and half years I’ve been working for them; environmental stewardship, an inclusive attitude toward all types of beer drinkers, and that as we age, we face new challenges and new decisions. Using the experience we’ve gathered and learning from our mistakes, we can be better than we ever were.

I look forward to 2023, both in my personal and professional life. Yes, there will undoubtedly be challenges in both facets. For instance, in my personal life I’m learning about the struggles of being a responsible homeowner. I don’t love spending my weekends in a basement insulating or hanging floor joist hangers, but I do feel a real sense of accomplishment. Obviously, there are more than 16 different breweries in Maine now, but I love the increased competition, cooperation, and collaboration. The younger breweries have pushed Baxter to innovate and try new recipes. We are in year four since our rebrand, and the brand has never been stronger. I’m not sure I could say we would have seen the same success if there were still only 16 breweries.

Not only has Baxter been successful in innovating new recipes, but we’ve done it while still sticking true to our brand. We are, and always have been, genuine to who we are and the beer we brew. I’ve always admired that Baxter Brewing represents all facets of Maine life, and I think our fans do as well. I’m sure the next twelve years will have their challenges, but if Baxter Brewing can make it through a global pandemic while continuing to thrive and grow, I’m sure there isn’t a challenge we can’t handle.