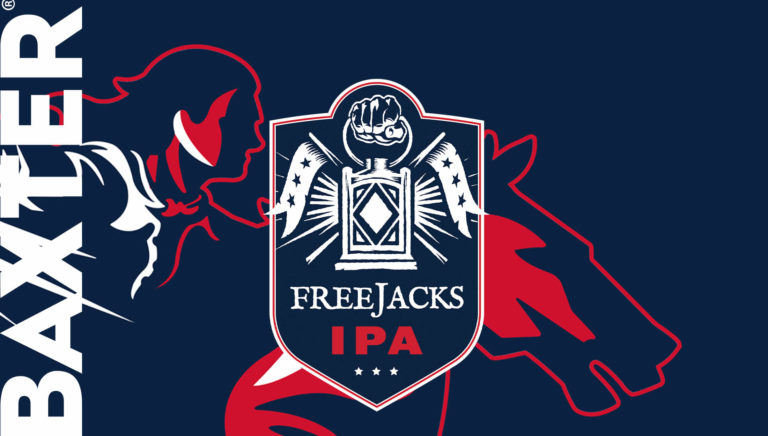 Oi! There’s just something about any activity that gets your blood pumping, heart racing, and skin covered in dirt and sweat that we can’t get enough of in the northern wilds of Maine. We brew our beer with purpose at Baxter. It’s meant to accompany you through the ups and downs, the nitty-gritty; life, with all the glory and hard knocks it has to offer. And what hits harder than life? Not much.

For those of you who don’t know, Anthony Purpora is the star Prop for the New England Free Jacks, one of Major League Rugby’s new expansion teams debuting in the upcoming 2020 season. As a Prop Anthony’s one of the strongest guys on the team, using his shoulders to drive against opposing players and win back possession of the ball. It’s a position that takes a lot of strength and determination – as does pretty much all the positions on a rugby union pitch – which is something we can always get behind at Baxter Brewing.

Rugby has been long hailed as a tough sport, a pad-less precursor to the gridiron football that dominates our autumnal landscape in The United States. And thus a great mystique surrounds it. Is it as brutal as they say? Are teams comprised of prehistoric behemoths with a penchant for busted lips and broken bones? Or is there an unspoken beauty beneath the sport’s physicality gone amiss? With over 180,000 clubs and 3.5 million players worldwide, there’s certainly something between the goalposts worth watching.

If you are wondering what all this has to do with Baxter Brewing, allow me to introduce Baxter’s Free Jack IPA, the official beer of the New England Free Jacks.

Baxter Brewing has partnered up with Major League Rugby as a proud sponsor of the New England Free Jacks and will be brewing Free Jack IPA to be sold – along with our flagship Stowaway IPA – at the Union Point Sports Complex in Weymouth beginning with 2020 inaugural season.

Free Jack IPA is a delicious blend of East and West-Coast IPA styles. It’s packed with tons of tropical fruit flavor and mild hints of bitterness held together in a beautiful, clean presentation. It’s a proud addition to our lineup and is sure to be a hit during game day at the stadium.

Of course, that won’t be the only place you can find it.

Did we mention Rugby’s mass appeal worldwide earlier? It’s a thing. And there are a number of bars in Boston no stranger to the passionate zeal of rugby union fans. Perhaps most popular among them is Hennessy’s on Boston’s historic Union Street. On December 12, at 5:00 PM, we will be tapping Free Jack IPA and unveiling our collaboration jersey with the team at Hennessy’s. If you’re a fan of rugby or good beer (or both!) please join us for this exciting and special moment in our brewery’s history. We’re gearing up for a thrilling new year at Baxter and a down-and-dirty, fist-pumping season for the New England Free Jacks! We hope to see you out there, getting dirty, living life, drinking good beer!