Blog / Remembering The Ice Storm of ’98

Remembering The Ice Storm of ’98 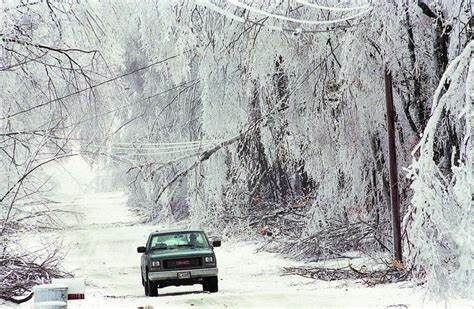 I was only five years old in January of 1998, but that was old enough to remember the storm. The Icestorm of ’98, as it was later known, was the blizzard of the century. For 48 straight hours Mother Nature let loose her blistery wrath and dumped ungodly wet precipitation and ice across Maine. When everything was said and done Maine was blanketed by a teeny bit of snow and a whole lot more of ice. Three to five inches of ice to be precise. Predictably, all that ice was too much for the trees to handle and they snapped like toothpicks under the weight.

Now I’m usually pretty harsh on CMP as a company. I was not surprised when news broke earlier this month that CMP finished dead last in customer satisfaction on a J.D. Power report that included 145 of the largest electric utility brands across America. Nor was I surprised when news broke back in 2018 that their botched rollout of their online billing system led to overcharges statewide. I could continue, but I will give them credit during the aftermath of the Icestorm of ’98. Over 700,000 Mainer’s lost power during the storm, and CMP worked around the clock to restore power. I was one of those 700,000.

The night before the storm was a busy one in the Burke household. I grew up in Appleton, a small rural town on the outskirts of Camden –nestled in sleepy Mid-coast Maine. We were no stranger to Maine blizzards, and losing power during a storm was as commonplace as CMP lying to their customers. We brought wood in from the woodshed, filled up every container we had with water, set candles and lanterns out, figured out which batteries still had a charge from that cluttered “junk” drawer, and waited for the storm to hit.

I was excited, after all, getting a snow-day from school was a 5-year old’s equivalent of hitting the lotto. Little did I know that it would be 10 days before we got power back, and 14 days before I went back to school. We lost power sometime in the middle of the night. I only have a few memories from day two of the storm –we were cozy in our wood heated house. We had one of those hand-crank radios, and I remember winding it up all day to catch the forecast report or listen to some tunes –life before smartphones and satellite internet was certainly strange.
There was only so much to do inside before my brother and I got bored. So, we bundled up in all the wool layers we had, and ventured out into our yard. I can’t remember how long we lasted out there, but it wasn’t long. I was so light that I could walk across the ice-crusted snow surface without punching through and being swallowed by the icy snow drifts; my older brother was heavier and much slower through the snow.

As the day turned to night, we lit the candles and lanterns –the snow, sleet, and sideways rain was beginning to slow down. As the howl from the wind died and eerie quiet settled in. It was one of those impossibly quiet winter evenings where the snow functions like a natural acoustic insulator, not that there were cars driving or birds chirping to begin with. I happily went to sleep dozing off and dreaming off whatever five year old’s dream of –probably Pokemon. I was rudely awoken by a terrifying ruckus of booming and snapping noises. I was horrified and ran for my parents. After all, I was certain that some hostile foreign power was firing off cannons and invading Appleton in the cover of the storm. Who knew that trees snapping in half could sound like that? The rest of the night was long periods of silence followed by a thunderous boom that echoed out into the night.

That was how I remembered the Icestorm of ’98, but recently I’ve had the opportunity to chat with other Mainers about their experience during the storm. Baxter Brewing’s winter seasonal is aptly named Icestorm of ’98 –more on this later. As I’ve been traveling the state selling beer, I’ve heard countless stories about peoples experience during the storm. Most of the stories share a couple of common threads –resiliency, comradery, and ingenuity. Of course, I’m paraphrasing as the most common response I got when I asked if they “Remembered the Icestorm of ‘98” was a simple
“Ayuh” or “Course I remember that friggen storm. Couldn’t shower for a week.” That being said, some people did elaborate and a few stories stuck out to me. For instance, take Mary Joe who was living in Kennebunkport at the time.

Mary Joe, a life-long Mainer, was used to Maine storms and the possibility of losing power. She had prepared for the storm and brought what she thought was enough wood into the house. Sure, enough the storm hit and she quickly lost power. She began burning her stockpile of firewood, but as the storm raged on her stockpile of wood was rapidly diminishing. Midway through day two of the storm, Mary Joe ran out of firewood. She made the treacherous trek out to her woodshed only to find it was frozen completely shut. That’s when she went to the basement got out her battery powered Sawzall and went to work on her dining room tables and chairs. Now that’s Maine ingenuity for you. While Mary Joe’s story was a novelty to me, many Mainers detailed how they jerry-rigged something to work despite the impossible conditions. One person made a makeshift alarm clock, by feeding a piece of twine through a small hole they bore in a candle –when the candle burned through the twine a bunch of pots fell to the ground waking them up.

Another common story was shared by Ryan in Freeport. Ryan also lost power in day one of the storm, but like many-a-Mainer Ryan had a large family of cousins, aunts, uncles, and siblings living nearby. Eventually word got to him –the old-fashioned way –that his family was safe and what’s more his cousin Ruby had power. Ryan got dressed in his warmest clothes, packed a backpack with essential goods, strapped on his pair of cross-country skis and prepared for the 5-mile-long ski across the snowmobile trails to his cousin’s house –the road was still blocked by multiple blowdowns. Along the way he stopped at his parents to tell them the plan, and then later his sisters house as well. Finally, he made it to Ruby’s house and sure enough, the rest of his family was there to greet him. The next week the entire extended family huddled together in Ruby’s house sleeping in sleeping bags by the fireplace. Of course, being good neighbors, their house was a revolving door for any weary or frozen traveler. Word got out, among the CMP workers that there was free coffee at Ruby’s house and they showed up in droves. Ryan said they, “Met a lot of good people that week. Some of which I still talk to today.” Ryan’s story is a common one. When disaster strikes in Maine, we are quick to open our doors to our neighbors and in the process make lasting relationships. 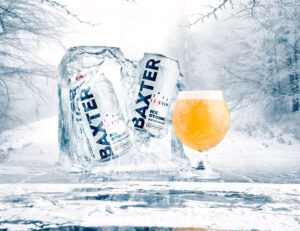 Baxter Brewing remembers the Icestorm of ’98 as well. We remember how the community came together in the aftermath. Mainers helping Mainers. Trucks passing by that would pull over and tow your car out of the snow drift. Neighbors opening their doors to those without power or heat. Restaurants giving discounted rates to CMP workers. We remember all of this and that’s why it is our pleasure to release our winter seasonal Icestorm of ’98. Icestorm of ’98 is a delicious, approachable, low ABV (5.9%) New-England IPA. What’s more its tropical fruit forward flavor profile will have you day-dreaming of sunny beachside vistas. Hey, anything helps when you’ve gotta shovel off your porch or a path to the garage. This January will mark the 24th anniversary of the Icestorm of ’98, do yourself a favor and pick-up a 6pack of Icestorm of ’98. We can’t promise a mild winter, but we can brew a beer to take the edge off.